One of the things we’re asked every now and again as individuals working in the online media space in Zimbabwe is, how does the business side of this work. Or put plainly, “how do you make your money?”

Sometimes this is asked by some seasoned journalists and content creators keen to understand better what kind of business opportunities are available for their kind of work online.

We thought it would be a good idea, therefore, to break down the common business models, or plainly, the ways to make money. For each business model we’ll list well-known media brands that employ the method.

If we leave out a business model (or revenue stream) that you feel we should have included, please just post it in the comments below and we’ll consider it for inclusion.

How this works is that a publication approaches local businesses and asks them to advertise on the publication’s website or social media streams. This normally works for established media brands whom the advertisers probably know already. It also works because these publications usually have a sizeable audience that the brands are keen to access. Smaller publishers, that may not be well known yet, are still able to access some of this direct advertising business if their leaders are well networked.

Usually, the advertising is charged as a flat monthly fee regardless of the actual number of clicks or impressions that the advertiser gets.

Usually, the large company does not deal with the publication directly, preferring instead to deal with advertising agencies like DICOMM McCann, MultiMedia, Jericho, Barkers Ogilvy, ShiftEngage, Adrenalin and so on. This layer serves both the publisher and the brand well as agencies take on the role of translating what the publisher offers in audience to an integrated advertising campaign. Also, it’s easier for brands to work with one agencies, which then takes the burden of talking to various publishers and creating a campaign for the different audience types.

Needless to say, large brands (and especially going through an advertising agency) means payments are not immediate. In our experience, publishers can get paid anything from a month to even 9 months.

Publishers using this business model include:

Being easy to start however does not translate to making easy money. The Adsense platform essentially enables advertisers to be paid for clicks made on adverts displayed on the site. A decent range of how much publishers using Adsense get paid in Zimbabwe is anything from 50 cents per 1,000 pages viewed to about $5. Exactly how much depends on the quality of adverts that a publisher’s audience and news attract.

Examples of publishers using Adsense include:

Subscription is an emerging business model for news publishers in Zimbabwe. This follows the much-reported success that some big brand publishers in the US and Europe have had with model – notable amoung them New York Times, Wall Street Journals, Financial Times and the Washington Post.

How this works is that the publisher asks its readers for a monthly subscription fee to access its content. Most publishers give a limited number of articles for free to each reader, say, 5.  To read more pieces of content one has to pay.

In terms of software enabling this, the most popular is Memberful, but WordPress’s WooCommerce can also be used. The main drawback of these subscription systems is that they don’t provide for local payment methods such as EcoCash and Zipit. This can, however, be integrated by software developers using local payment gateways such as Paynow.

Even though subscription is an emerging model for publishers who are now increasingly considering it, there have been 2 publications that have based on this model in Zimbabwe for about a decade. The largest one is Zfn which has been sending daily newsletters to subscribers for a fee for more than a decade now. The other is FinEx which is also an email-based subscription newsletter and was started later by a former Zfn staffer around 2012.

In terms of news websites, there’s only one notable publication that has started to use this revenue model locally, which is the Financial Gazette. Another one, The Daily News (also an ANZ publication) ran on this model for about a year, before pulling it down.

A related but somewhat different type of subscription that’s noteworthy here is the ePaper type subscription. This has been tried by traditional newspapers and one that’s active at the moment is Zimpapers’ NewsHub. How this works is that a scanned copy of the physical newspaper is made available online for a subscription fee. Sometimes you can buy the physical copy as an individual item in an online eCommerce shop like this AMH one.

4. Pay what you want

Like subscriptions, this is also an emerging business model in Zimbabwe and not much has been reported on the experience publishers have had with it.

The difference between subscriptions and donations is small – Subscriptions have a set price where donation drive sites ask for whatever amount a reader is happy to pay. They usually have a minimum though.

There are two notable publications trying this model – the first one is the relatively new site ZimLive.com. Another site is Zimeye.net.

One of Zimbabwe’s most popular podcasts Sadza in the Morning, a popular culture podcast, also introduced donations via Patreon

Even though these publications ask for donations, they shouldn’t be confused with the traditional donor-driven organisations which are typically NGOs.

These are publications that don’t ask of anything from their subscribers and also don’t employ use any advertising on their websites. They are funded by international organisations such the DFID, the EU, HIVOS, the American Embassy and so on.

They are usually set up to meet a social impact-oriented objective. The people that set up these organizations, therefore, have to demonstrate to the donors through proposals that show how the project is helpful in meeting such impact objectives.

Examples of such publications include:

6. Chumbox – aka “You will not believe what every publisher will do for money” 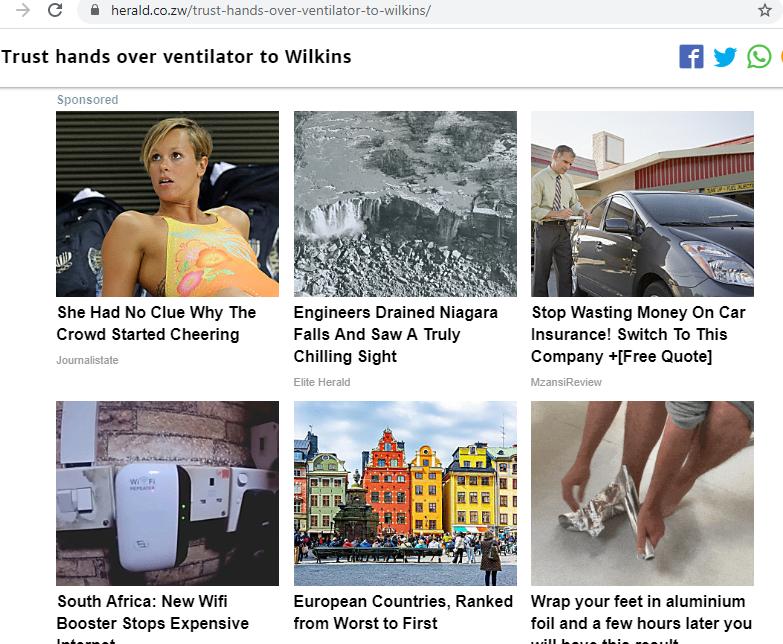 You have seen these on almost every news publisher’s site here. Named after decomposing fish matter used to bait large fish, Chumbox is the adverts of misleading story links presented as a grid or feed at the bottom of a news site’s main content.

They have named Chum because they are low quality and many publishers only use them because they pay relatively better than advertising networks such as Adsense.

When a publisher uses them, readers will see links and crazy pictures with words such as “These 2017 cars are going for dirt cheap prices”, “You will not believe the house Chuck Norris lives in”, “You will be shocked what they found hidden in their yard” and so on.

There used to be a somewhat healthy competition in the Chumbox provider industry but after the merger of Taboola and Outbrain, there’s really one large provider and then other much smaller ones.

You can read about them here to understand more how the ecosystem works.

Publications that use them include:

Public Relations as a publication’s business model is rarely on its own and never really a publicised part of the business. The PR side works as a side gig for the entrepreneurs running the publication enabling them to diversify their revenue streams. In the process, the line between what the publication publishes as news and what it pushes as PR, for whoever is paying, gets blurred.

For the avoidance of doubt, this is not necessarily Brown Envelope Journalism (BEJ), but the difference is so little we’ll lump it here together.