After launching and then gradually discontinuing e-paper sales and subscriptions about a year ago, Alpha Media Holdings has re-introduced the format and business model.

This re-introduction has been spurred more by the government ordered 21-day COVID-19 lockdown, which has meant no sales (or a very steep decline) of the physical paper on the streets.

Here’s an advert of subscriptions for the paper: 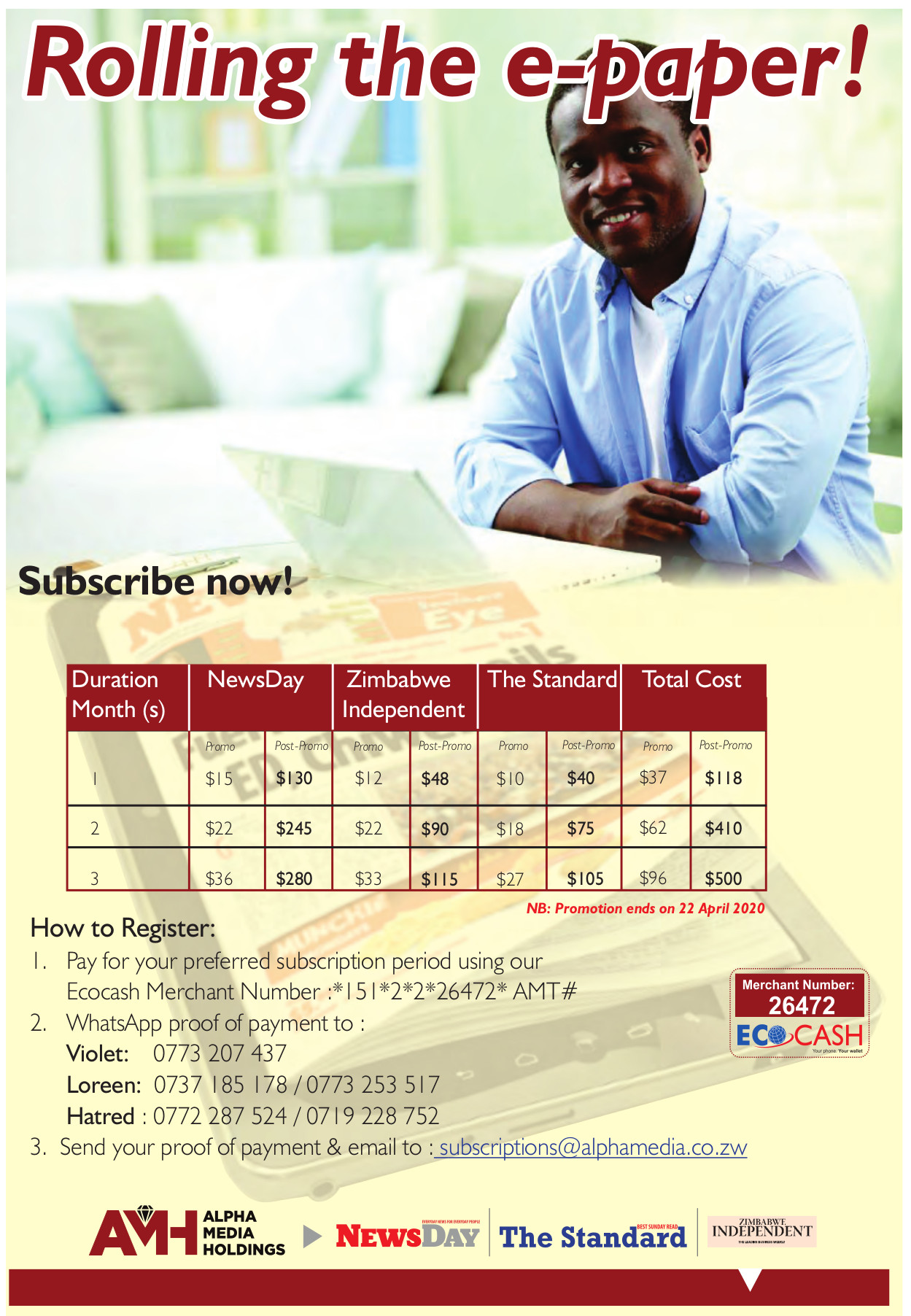 The prices are quite different from prices advertised a few days ago (3 April), and curiously, the option to just buy a single copy is not there anymore. See below:

The e-paper is a PDF copy of the newspaper that would have been sold on the streets. Here’s a download of a recent NewsDay e-paper, just for demonstration purposes.

Delivery is via email even though we’re told WhatsApp is also a channel the company is preparing to distribute to. So we’ll just include a few thoughts on that.

WhatsApp is used a lot in Zimbabwe. The over 8 million mobile internet subscriptions (industry regulator figures) suggest a number of WhatsApp users somewhere close to the figure. For a mass-market publication like NewsDay, it’s a channel AMH indeed cannot ignore.

But there are problems with this attractive channel. Facebook (the company that owns WhatsApp and therefore makes rules on what can be distributed on the platform) won’t allow anyone to distribute digital products via its official business API.

Doing it officially is therefore out of the question, unless AMH gets some kind of special waiver to do this. Highly unlikely, but not impossible.

Not doing it officially means some kind of workaround. Workarounds have a few problems:

The problem of Piracy

The second problem AMH has to solve, and which is related to the WhatsApp issue, is piracy. WhatsApp stops companies from distributing digital downloads on but it doesn’t stop ordinary people from forwarding PDFs to each other.

The solution to this problem has to somehow balance between security and keeping the service convenient for paid subscribers. At some point, more security does keep out the bad guys but annoys the hell out of your paid subscribers, who simply want to receive and conveniently consume a product they have bought.

We emphasise that this could be a theoretical problem because sometimes people just do the decent thing when you ask them nicely.

So far, AMH is accepting payment via EcoCash, the country’s dominant mobile phone payment system. It accounts for over 99% of mobile payments in the country (regulator figures for 4th quarter 2019).

Like WhatsApp, you cannot ignore EcoCash. So much that, you’ll notice, EcoCash is the only option being shown on the AMH e-paper subscription advertisements.

So far the payment system is manual. Again, this makes it quite cumbersome for both the subscriber and AMH. It also exposes the process to human error. But AMH’s publications are huge brands and as said above, customers will appreciate getting their favourite newspapers as PDF so they may be willing to go through the process.

Still, a more convenient (for the subscriber) and scalable (for AMH) process would be to automate the payment and subscription. For mass-market NewsDay, the company probably wants to do the automation on WhatsApp. Again, unfortunately, WhatsApp won’t allow – see screenshot above.

It also applies to the other two publications (The Independent and The Standard) but the assumption is that these have a decent chance as web subscription products that capture the roughly 250,000 households (POTRAZ figures and our assumptions here) that have fixed internet subscriptions at home (generally referred to as ‘having WiFi at home’).

An option is to do this via the EcoCash platform itself. That is work with EcoCash to have AMH subscriptions as part of the EcoCash USSD menu or App. This way, the EcoCash system will get the payment and subscription details and it will pass this on to the AMH subscription platform. This would be quite convenient for customer. EcoCash has done this kind of thing with municipalities, DStv, Edgars and a few other companies.

One feature that would really be brilliant for EcoCash to build in addition (USSD or not) is recurring payments. The same way credit cards or PayPal works online where, once you approve a subscription payment, you have the option to tell the payment platform to automatically deduct renewal subscription payments in future.

Automatic recurring payments are great for providers of digital services because the renewal is enabled by default. The customer doesn’t have to make any decision to renew or not each month. It’s a very different setup to the current one where by default the subscription does not renew and the customer has to decide each month if they still want the service. And if they do, they go through a whole process of checking the price, deciding if it’s worth it, wondering if there are alternative products in the market, and if they are convinced, then initiating payment, watching out for pin prompt on their phone, the approving the transaction, and checking that the subscription has renewed. Ok, we excessively broke down the process to make the point.